Dogs have a variety of oddities, but have you ever seen a green puppy?

A green puppy was given to a Canadian couple just in time for St. Patrick’s Day.

When Audra Rhys and Trevor Mosher of Lower Sackville, Nova Scotia, came to know that their female valley bulldog, Freya, had given birth to a black amniotic sac on Jan. 27, they feared the worst. Because she arrived separately from the other seven healthy babies Freya had delivered in clear sacs, they concluded the puppy within this curiously colored sac was stillborn.

But then something incredible occurred: the puppy began to move. 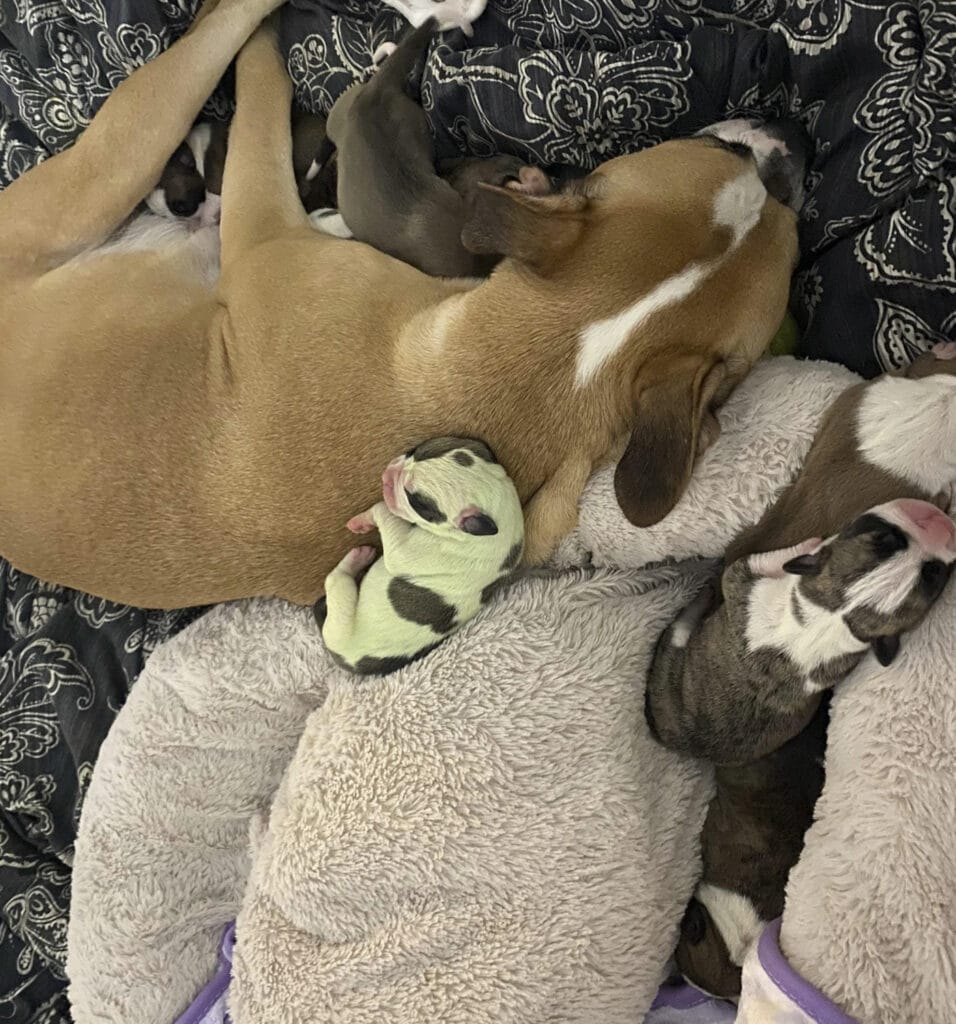 According to Rhys, who spoke to Global News, “We began drying her off when we discovered she was green, and we instantly suspected something was wrong. ‘My pet is green, what’s wrong,’ we Googled.”

Fortunately, it turns out that green puppies are pretty rare but otherwise healthy. 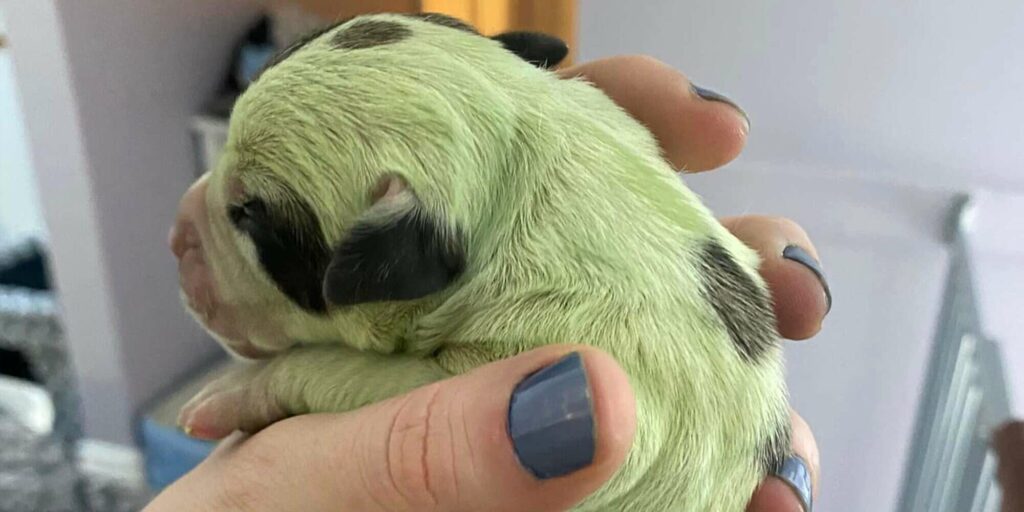 Bronwyn Crane, DVM, MS, a veterinary reproductive specialist at the Atlantic Veterinary College at the University of Prince Edward Island, noted how unusual the occurrence is.

“I’m not sure if I can discover a precise rate of occurrence, but I’m guessing it’s [less than] 1:10,000,” she told Global News, adding that she has never seen a green puppy before.

Some light-colored puppies may develop a green tint when they come into touch with a green pigment called biliverdin during development. We’re not sure why this happens. Biliverdin, the pigment that causes bruises to turn green, can infect the placenta and amniotic fluid, thereby dyeing a dog’s fur. (Just to be clear: this isn’t artificial green dye that was added after birth.)

Little Fiona, named after the lovable character in Shrek by Rhys and Mosher, is unquestionably a miracle. However, she isn’t the first shamrock-colored dog to make the news.

Rhys considers herself fortunate to have been a part of this once-in-a-lifetime opportunity, and she plans to cherish the experience. 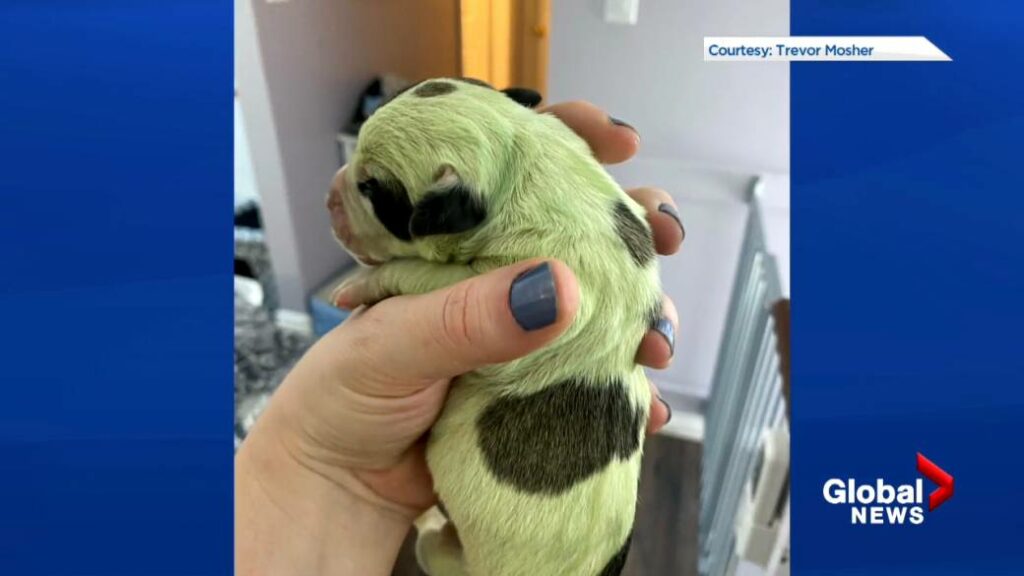 Green puppies, unfortunately, lose their distinctive coloring as they get older.

According to Rhys, Fiona was initially a light lime green, but the hue has faded.

Rhys said that the pair want to keep Fiona or find her a forever home with a close family member. She says that it’s been incredible to see how many people are interested in Fiona’s story and how much joy she’s provided to so many people.

Thanks to Daily Paws for this story. Also thanks to Global News for the video.

Meet Milkshake, Is He A Real Pug Or A Unicorn? 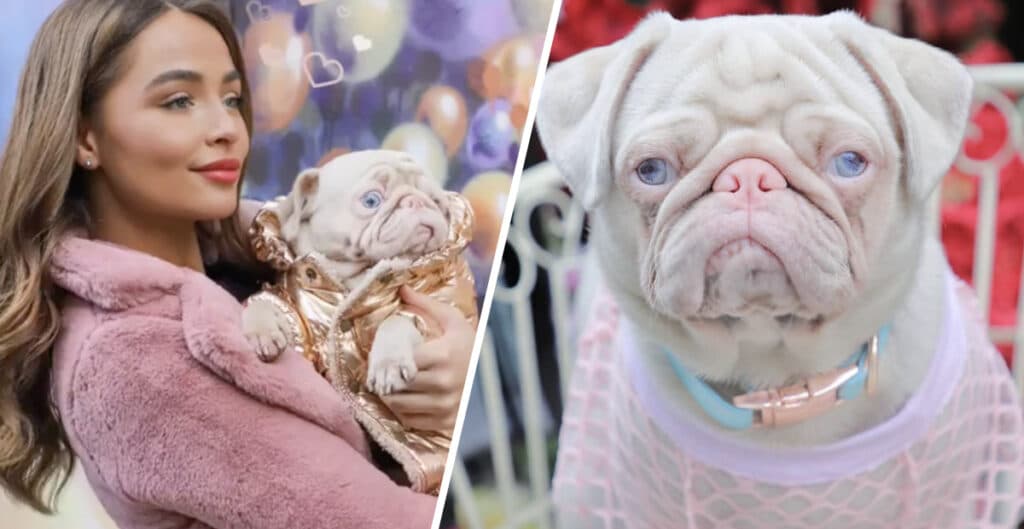 Milkshake Is An Endearingly Wrinkled 3-Year-Old Pink Pug. He has a thriving modeling career and a sizable social media following. Thanks to his distinctive coloring and endearing attitude. FacebookPin This family dog made a kitty best friend when … 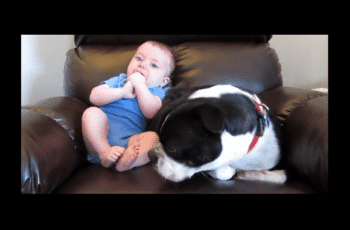 FacebookPin Babies and puppies are very cute. And when they …